A native of St. Joseph in southwestern Daviess County Ky. Keith grew up under many musical influences from about 4-5 years old starting from his granddad (John S. Fulkerson) showing him guitar chords for old fiddle tunes on a Roy Rogers guitar Keith’s dad Carl bought for $5 from a neighbor as one of his very first Christmas gifts, to his aunt Sherry and uncle Larry introducing him to the sounds of new music developing the 60's and very early 70's.

During grade school Keith kept his musical interests mostly to himself listening and learning songs he found interesting but a turning point came while in the 5th grade when his teacher (who happened to be his uncle Stud Clements) brought in a portable turntable with a copy of Tchaikovsky’s 1812 Overture he received by mailing in 2 box tops and would play the whole version including the canon blasts toward the end of the piece thus inspiring a new musical awakening. From there the music structures shifted and Keith spend more time listening and finding his musical voice by creating compositions of his own.

After graduating from Apollo High School Keith wasted no time and moved to the Nashville area and began the struggle to find his place in the music industry by in playing rock, pop, R&B.

Keith moved to south Texas in 1981 when an opportunity presented itself to play guitar for the Younger Bros band fronting such acts as George Straight, Reba, Neil Young, and many many more. By the end of the 80's the Keith wanted to spend more time on his own musical muse and focused not only the music but also the instruments to play them on.

After some years of doing repair and restoration of fine instruments in the 80's and he moved his focus in the 90's on designing and building instruments for himself for his own company to explore the sounds and songs he hears; at the same time served as a design and manufacturing consulting for many small and large instrument companies.

In 1995 he married Tammy and began their family and they settled in raising their 3 children, Abigail, Annie, and Jake.

The accumulation of all the various experiences came when in 2007 Keith began and finished the instrument he waited close to 30 yrs to build and perform with; a 27 string acoustic which gave him the ability to get to the music he heard that his 6 string limited.

Since then Keith has built instruments for his expanding live performances with songs from his first CD Ride recorded in 2011 and is currently finishing instruments and compositions for the next CD with concert bookings and clinics following. Also, composing music for a video game company soon to be released on the X-Box, PlayStation formats. 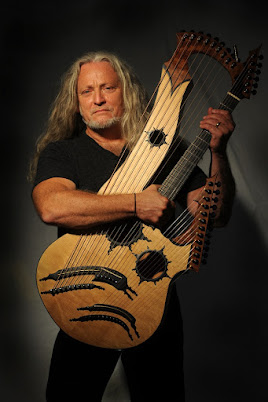 Making Instruments Out Of Music